In 1963 a car dealer in London’s East End received a visit from a disgruntled customer demanding his money back. When the dealer turned him down flat, he promised darkly to come back the next day “with some of his mates from over the river”. The next day he returned, but before he had a chance to say that, on reflection, and after discussing it with his mates, he had decided to accept the car after all, the door of the office burst open. A large ugly man wearing an immaculately tailored pinstripe suit and brandishing a sawn-off shotgun rushed into the room shouting and swearing, and shot the customer’s legs off, leaving the car dealer to call for an ambulance. This was Ronnie Kray, leader of the notorious Kray Brothers gang, and the car dealer had been paying him protection money. Of course the principal protection being purchased is from the racketeers themselves, but they do also have to step in if any of their clients is threatened by other parties. Not just to keep their own side of the bargain, but mainly to prevent anybody else from usurping their business.

This is actually the core business model of all governments everywhere – to attain and hold superiority in violence, and to eliminate any rivals.  This ultimate origin is hinted at by the symbolism accompanying governments to this day. When the British parliament is in session, a large ornate gold mace lies on the table in the centre of the chamber. 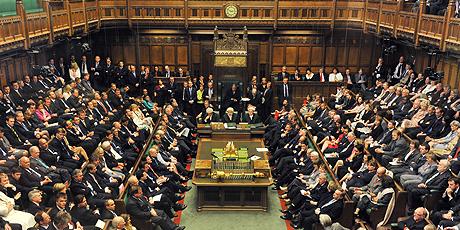 Even the mayor of Winchester is preceded by the bearer of a silver mace on ceremonial occasions. What does this mace symbolise? An actual mace is the crudest and most vicious of weapons used in primitive combat. A development of the club, a mace consists of a heavy iron ball – usually with spikes all over it – attached to an iron or wooden handle. The bearer of such a weapon would have an overwhelming advantage in hand-to-hand conflict – a single blow would instantly disable any opponent, and would

This is the primary service that citizens are offered in return for the payment of their taxes – governments at all times and in all places since the foundation of the city states 6000 years ago have justified their existence by claiming to provide the service of protecting their subjects from – real or imagined – predation. Police forces protect the citizens from theft or violence at the hands of local miscreants, and military forces protect them from subjugation by over-ambitious governments of other states. And, just as with the more blatant example of the gangland racketeers, the police and military forces stand ready to be directed against any subject who fails to pay their taxes, or raises a credible threat to the authority of the government. 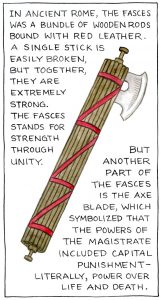 The ‘fasces’ – an axe with a bundle of sticks tied round it – carried before Roman consuls served a similar purpose, to underline the authority of the consul to punish disobedience by beating or beheading.

We all take for granted the features of the world we are born into. One of the features of this world is that it is divided into nation states, and most people most of the time identify with the nation state they live in, and are more or less willing to give it their allegiance. But it hasn’t always been so. How did this come about? The best current  estimate is that our species – Homo Sapiens – has existed for about 200,000 years, roughly identical in anatomy and brain structure to contemporary humans. For 95% of that time they survived by hunting animals and gathering the edible parts of wild plants, much as the remaining isolated tribes of hunter-gatherers do today.

Then, around 12,000 years ago in several widely separated parts of the world – Central America, India, China, and the Middle East – people came up with the idea of cultivating that food rather than going out and looking for it. This enabled a much greater density of human population on a given area of land. Because the farmer could produce more food than was needed for himself and his family, some members of the community could develop specialised crafts and trades –  as potters, weavers, tanners, brewers and so on.

Other aspects of the new lifestyle were of more dubious benefit: the concept of ownership of property, particularly the ownership of land; the domination of women by men that displaced the equality and partnership that had been the norm in most hunter-gatherer communities. And some groups decided that it was easier to steal the food, rather than growing it, or trading honestly for it. And so arose the specialists in violence who offered protection to the villagers in return for an appropriate payment. Since money had not yet been invented the payment would be made directly in the form of goods and services. And of course, just as with modern criminal  gangs, there would always be the threat – whether explicit or implicit – that declining the offer of protection would result in the violence of the protector being turned towards the clients themselves. Of course some governments are more benign than others, and some structures of government less susceptible to abuse, but in all cases their authority is ultimately derived from a willingness – and a perceived capability – to apply decisive force.

“And the life of man, solitary, poore, nasty, brutish, and short.” This is one of the most famous sentences in the English language, written by Thomas Hobbes in his 1651 book Leviathan. In this, possibly the earliest work of British political philosophy, Hobbes was attempting to justify the rule of Kings and other forms of government by asserting that they provided a context for a more prosperous and satisfactory lifestyle than “the natural state of man”. However most anthropologists today are agreed that its opening premise is 100% incorrect on every count. Homo Sapiens has always been a social animal, and enjoyed the support and comradeship of the tribe. The cave paintings of over 40,000 years ago testify to a rich, creative inner life. The agricultural labourers who made up 95% of the population in Hobbes time were no wealthier than the members of any primitive clan, and their life expectancy was actually shorter. It was shorter still for urban factory workers in the 19th century.

This is Section 1.6 of my forthcoming book The World in 2100: What might be Possible for Humanity? It is the introduction to the thread on Society and Government, which – in conjunction with the other seven themes of the book – provides a comprehensive survey of the position we find ourselves in at this critical time in human history. The next topic in this thread will be The Beginning of Government by Consent.

If you haven’t already done so, you can register to receive a free review copy just before it goes on general sale later this summer. Registering will also take you straight to Chapter 1 – The Foundations which will give you more idea of what the book will cover.