Section 1.7 – The System of the World

Gordon Brown famously announced “an end to Boom and Bust” – a few year later the world was plunged into the biggest economic crisis in history, which almost brought down the global banking system. (Incidentally, we will be examining the underlying mechanism of boom and bust cycles in the Finance thread later in the book).

Richard Nixon, on being elected President in 1968, promised to “fine tune the economy”, prompting a retort from economist J K Galbraith that “obviously the tuning had formerly been too coarse”. Shortly afterwards, the US was experiencing the new phenomenon of ‘stagflation’ – economic slowdown coupled with soaring prices, whereas previously it had been a choice between one or the other.

Alan Greenspan, chairman of the US Federal Reserve stated in 2003 that “the application of more-sophisticated methods for measuring and managing risks had been key factors underlying the remarkable resilience of the banking system“. Five years later the entire system was on the point of collapse.

Governments everywhere are promising to improve the economy, or to be able to make a better job of doing so than their rivals would. Sometimes unemployment is too high, so they try to fix that by reducing interest rates. Shortly after that inflation is running away at unacceptable rates, so interest rates are increased. How well is this working? Sometimes reducing interest rates does reduce unemployment. Sometimes it doesn’t; as in the last few years when interest rates have been reduced effectively to less than zero and yet ‘economic growth’ remains elusive (in most people’s actual experience, whatever the statistics say). Sometimes increasing interest rate does rein in inflation; sometimes it increases it, perhaps because everyone’s mortgage and rent payments then go up. Sometimes we end up with high inflation and high unemployment. Even when things seem to be working just fine, within a very short time they seem to be veering out of control again. All of these issues, and many related ones will be explored in much more detail in the Finance thread, but they cannot be understood without having a grasp of the Systems view of processes, which is what we are beginning to distinguish here.

For as long as anyone can remember, people have been trying to fix problems, yet the problems remain unfixed, or get worse, or morph into different problems.

The same thing happens on scales large and small. Let’s consider that this phenomenon is a product of the assumptions that we make about the way the world works. There’s an unspoken idea in the background that there’s a simple chain of cause and effect that we should be able to tinker with. What we do when we are not getting the results we want? I think that most of us subconsciously have a mental model of the way things work that looks something like this:

And so – we either try to change the process, or alter the inputs that are going into the process. This seems logical, but how does it work out in practice? I would suggest that almost invariably we have one of three outcomes:

Consider that what was missing from our model is that almost invariably the output in some way affects what is going into the process, so it would look more like this:

This is called feedback, because some of the output of the process is fed back into its input. Note the ‘+’ sign, which indicates that a change in the output tends to affect the input in the same direction. If you think about it for a moment, the rate at which the rabbit population is increasing at any moment will be exactly proportional to the size of the population. This is the defining characteristic of what we call an exponential growth curve. The same sort of curve is generated by compound interest – where the income received from an investment is continually applied to the purchase of more of the income-generating assets. It is the core strategy in every scheme for generating significant wealth within a limited time-frame, as we will be examining in the Wealth and Finance threads of this book. And we will get more insight into the underlying dynamics of exponential growth in the Numbers and Patterns thread.

However, feedback comes in two forms: this first kind of feedback I shall call reinforcing feedback, because it has a tendency to accelerate the results that are output from the process. Let’s now look at another example. If you have a central heating system, there will be a thermostat which controls its operation.

If the temperature in the room is lower than the thermostat setting then the heating will be turned on; and if the temperature is higher then the heating will be turned off. This is the second kind of feedback, which I will call stabilising feedback. In this case, the signals fed back from the output tend to reduce changes in the result, rather than to further increase it as was the case in the reinforcing feedback examples (hence the ‘-‘ sign).

(The technical names for these two types are positive feedback and negative feedback. I didn’t use those because people are sometimes confused by the connotations of the words ‘positive’ and ‘negative’. There is a tendency to associate the word positive with implying something good, and the word negative with implying something bad. But in the case of feedback systems, whether the outcome is desirable or not depends on the circumstances. Positive feedback tends to cause exponential growth, subject to certain constraints. Negative feedback tends to maintain a certain balanced condition. Exponential growth may be a good thing in some contexts; for example, if you are talking about the performance of your investments, or the harvest of your apple orchard. But not so desirable if you are talking about the level of pollution in your environment, or the size of a cancerous tumour in your body).

Stabilising feedback systems are everywhere. When the temperature of your body rises by a fraction of a degree, mechanisms step in to lose heat more rapidly, such as by sweating. If it falls by a fraction of a degree, the body generates more heat, or cuts down the rate of heat loss. Other systems regulate the concentration within the blood of oxygen, carbon dioxide, sugars, lipids and other dissolved chemicals. An elaborate set of feedback loops navigates and steers an airliner to its destination without any action on the part of the pilot. When you turn the steering wheel of your car, a powered hydraulic system points the wheels in the desired direction without needing your muscular effort to move them. Feedback loops within the circuits of an audio amplifier ensure that the sound patterns emerging from the loudspeakers are an accurate replica (at higher energetic levels) of the signals fed into the input.

But this is only the beginning of the story. All feedback loops in the real world are embedded within larger ones. And all the pathways within them contain their own smaller feedback systems, both reinforcing and stabilising. If the network shown in the rabbits example above was the whole story then the world would very quickly be entirely covered with rabbits! Let’s add another subsystem called ‘grass’:

(Note the ‘-‘ sign, indicating that increasing the number of rabbits tends to reduce the amount of grass). And then we could have another subsystem called ‘foxes’:

In the real world there is a vast integrated network of feedback loops connecting all of the processes. Here is an attempt to envisage some of these connections in a diagram created by Hazel Henderson: 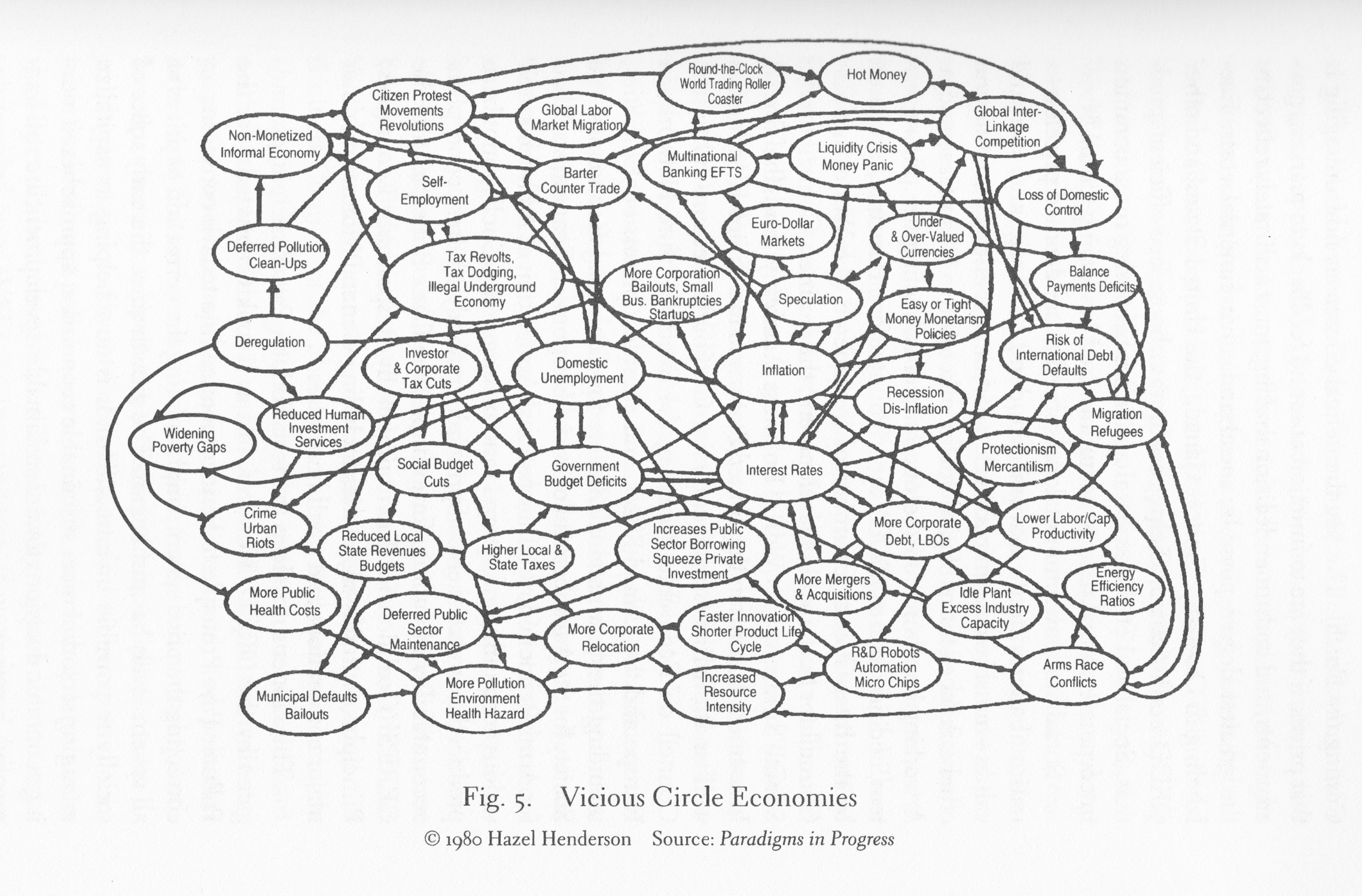 Complex as this is, it still leaves out a huge number of the interconnections that exist in the real world. And whilst it gives food for thought when contemplating these issues, it is far too complicated to help with drawing useful conclusions. In a later section in this thread I will describe a simpler model containing just 11 variables, with plausible inter-relationships of the effects that alterations in one variable would have on the others:

This model was encoded into a computer simulation in 1971. The software allowed for the input of various combinations of assumptions to be fed in regarding policies that humanity might choose to adopt in the next few decades. The output of the program consisted of graphs plotted to depict the values of those variables projected from year 1900 through to 2100. years Eleven different scenarios were produced to reflect different assumptions about the effects of various different policies. Over the last 46 years, several of the projected scenarios have ceased to be possible .

This is Section 1.7 of my forthcoming book Swindled! – The Broken Promise of Western Civilisation, and What You Can Do About It. It is the introduction to the thread on The System of the World, which – in conjunction with the other seven themes of the book – provides a comprehensive survey of the position we find ourselves in at this critical time in human history.

If you haven’t already done so, you can register to receive a free review copy just before it goes on general sale later this summer. Registering will also take you straight to Chapter 1 – The Foundations which will give you an overall idea of what the book will cover.