Section 2.2 – The Dynamics of Exponential Growth 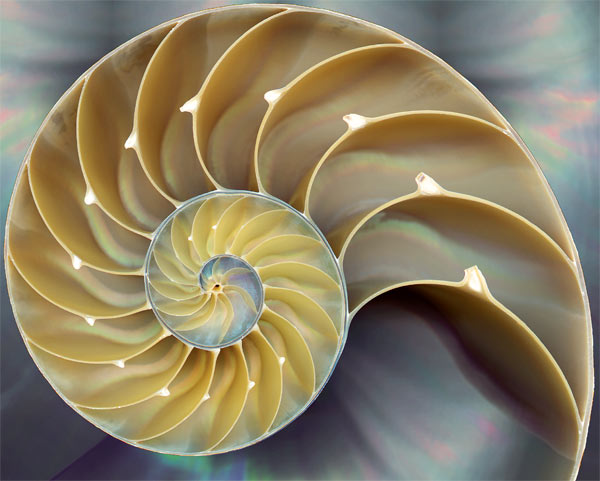 This Nautilus shell is a fine example of exponential growth. As you recall from our discussion in Section 1.7 – The System of the World exponential growth is caused where we have a reinforcing feedback loop from the output of a process to its input. As the Nautilus grows larger it eats more; and the more it eats, the faster it grows.

‘Moore’s Law’, coined in 1965 by Gordon Moore the chairman of Intel, is a conjecture that the number of transistors in a single integrated circuit would double every two years. It has proved astonishingly accurate, and persisted over a far longer time-scale than most commentators have expected (including Moore himself). At the time he proposed it, digital chips contained a dozen or so transistors. By 1974 the Intel 8080 – the first successful 8-bit microprocessor – included about 8,000 transistors. Today’s latest Pentium processors contain well over a billion transistors.

This has been the driving force of the digital and communication revolution. In 1972 the computer that the Ford Motor Company used to run its entire European operation took up a large room. Its central processor was housed in a box the size of a filing cabinet. The 64 kilobytes of main memory were in another case the size of a wardrobe, and its two disc drives were each the size of a washing machine, with a capacity of 30 megabytes each. Modern smartphones fit in your pocket and have memory of 128 gigabytes – that’s two thousand times the size of Ford’s pair of disc drives; and two million times the size of their computer’s core memory!

It is the exponential growth caused by the process of compounding interest which makes it possible to acquire financial wealth within a reasonable time-scale. Suppose that when you were born, a generous grandparent invested £1000 for you. If it was in a fund that was receiving interest at the rate of 7%,  and the interest received was reinvested into the fund, how much do you think you would have at the age of 20, 40 and 60?…

Small differences in the rate of interest have a dramatic impact on the size of the fund that accumulates over time. For instance, suppose the interest had been 10% instead of 7% – what size do you think the fund would have grown to? In that case it would have reached £45,000 by the age of 40, and by the age of 60 it would be worth £304,000!

In the next section – The Difference between an Enterprise and a Ponzi Scheme – we will be examining how these kind of rates of growth of wealth can be accomplished legitimately and honestly.

It is compound interest that makes it possible – in principle at least – to build up enough over the course of a working lifetime to provide an income in retirement. Consider the example of a person earning £20,000 a year who would like to have the same income in retirement, and is prepared to save 10% of their income towards that goal. They would need £400,000 by the time they retire if the fund can return them an income of 5%. Saving £2,000 a year, it would take 200 years to amass that by simple accumulation. However if the annual savings are put into investments which yield 10% – and this income re-invested – they would reach that £400,000 target in just 39 years! Of course, as already mentioned, many retirees are making the painful discovery that their investments have not been making anywhere near that 10% return. That wouldn’t even have been an unrealistic expectation. Any reasonably well-run business ought to be able to make a profit of 10% on capital employed; and in fact stock market gains plus dividends paid have exceeded this performance over most of the last few decades. One reason for the poor performance of pension funds, as noted previously, is that much of the profits that ought to have accrued to the fundholders had been highjacked along the way and diverted into the pockets of salesmen, fund-managers, stockbrokers and bankers – not to mention into the grotesquely inflated remuneration of senior executives in large publicly-quoted corporations.

And there’s another reason too: since 1997 the UK government has had its nose in the trough. One of Gordon Brown’s first moves as Chancellor was to eliminate the tax relief on dividends paid into retirement accounts, in a breathtakingly dishonest and cynical move. On reaching office, Brown realised that he couldn’t balance the books without an increase in taxation. On the other hand, if he increased general tax levels he would alienate the voting population who had just brought the Labour government into power; and if he increased tax on the super-rich he would antagonise the billionaire media moguls whose support was desperately needed. So he scooped up a windfall from a move that would not have been noted much at the time, but which he must have known would have disastrous longer term consequences. With most pensions already under-provided, this could only make the situation far worse by the time these investments reached maturity. Public perception of the heist was minimised with the co-operation of the media, whose owners knew which side their own bread was buttered on.

Over longer time-scales the results are even more extraordinary. What would you imagine an investment would return at 3% compound interest over 350 years? Keynes gave an amusing real-life illustration, writing in 1930. He observed that when Francis Drake returned to England in 1580 and presented the gold he had looted from Spanish galleons to Queen Elizabeth, she used it to pay off the national debt and was left with a balance of £42,000. She used this to set up the Levant Company, the East India Company and the Hudson Bay Company. These formed the basis of Britain’s global trading empire, and Keynes suggested that they might typically return a 6.5% profit per year on capital employed and re-invest half of that in expanding the enterprises. That 3% cumulative growth over 350 years would magnify the capital by a factor of about 100,000 – to a figure of £4.2 billion – which was the approximate value of Britain’s overseas investment holdings at the time he was writing.

Growth in any reinforcing-feedback system follows the classic exponential curve: 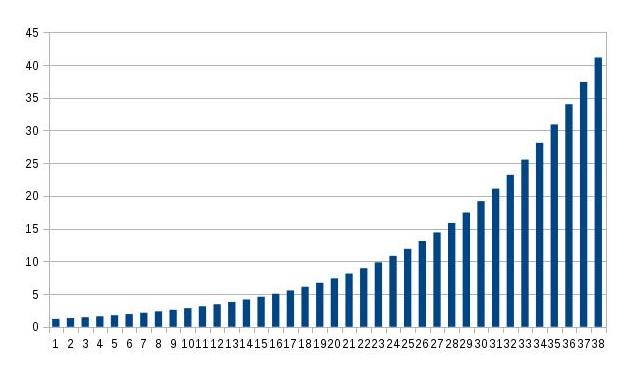 Although a common perception of the nature of exponential growth is that nothing much happens for a while, and then it suddenly takes off, this is actually an illusion. In reality, the curve is self-similar along its entire length. If you took any segment – whether in the ‘flat’ part or the ‘taking-off’ section, and re-scaled it to fit in the same frame, it would look identical.

This is clearly seen if we re-plot the graph with a logarithmic vertical axis – one that has a constant ratio between each marker rather than the familiar linear scale, with its constant increments. A logarithmic scale is like the shutter speed dial on a camera: each change of one stop doubles the amount of light that reaches the sensor. So when the speed is 1 millisecond, one more millisecond will cause a certain brightening of the image, but when it is 125 milliseconds (1/8 of a second), it needs to be extended by another 125 to get the same brightening effect. 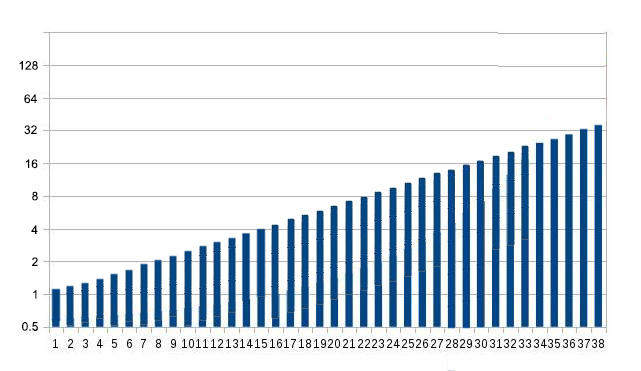 Although we often have trouble envisioning logarithmic scales, in fact they are very common, especially in relation to our sensory perception. At a low volume setting on your hi-fi there might be one tenth of a watt of power being fed to the loudspeakers; turn it up slightly to get a couple of just-perceptible increases of level and it will be sending one watt, and for another couple the output will be running at ten watts. The same subjective increase again would require 100 watts.

It’s a defining feature of exponential growth that a certain period will cause the value to double, and then the same period will double it again, and so on. There is a simple relationship between the percentage rate of growth and the doubling period.

The doubling time can be calculated by dividing 70 divided by the rate of growth. For example:

Declines in value – for example the reduction in purchasing power of currency due to inflation – can be thought of as a negative rate of interest, and the same logic applies. So losses accumulate dramatically as time passes. Assuming that the central banks achieve their “target rate of inflation” of 2%, that would mean that if you put away £1000 at the age of twenty-five, it would be worth only £500 by the time you are sixty. More detail on this in a later section on inflation within the Finance thread.

Exponential growth is a mathematical abstraction, but projection beyond a certain point always leads to an unsustainable position whenever we are talking about physical quantities in the real world.

To return to the example of breeding rabbits from the discussion in Section 1.7, each breeding pair typically produces six litters of six pups in a year, and rabbits become fertile after about six months (the exact numbers depend on the breed and the circumstances). So one pair would produce about 36 offspring in a year, plus the first litter will have added another 12 grandchildren and the second litter another 6, making 54 in all. Let’s ignore that last six to allow for the fact that older rabbits will be dying off, and call it 48.

At this rate, in just eight years the rabbit population would grow to 1,352 trillion – about one rabbit for each square foot if habitable land area on the earth! Clearly other factors would have had to come into play before then.

A few more doublings of the density of transistors on a silicon chip and we will be down to a single atom between one element and the next. Some time before that, Moore’s Law will necessarily have run out of steam.

Investors who were lucky enough to buy Apple stock at the time of Steve Jobs’ return in 1997 and hang on to it will have seen the value of their holding grow by a factor of 400 in twenty years – an astonishing 34% average compound rate of growth (even including the several dramatic setbacks). Expectations of future growth are factored into the current share price. However another nine years of 34% growth rate would take Apple’s valuation to a level that exceeded the entire GDP of the United States. Another four years after that and it’s valuation would surpass the GDP of the whole world!